Well, the tulips were short lived as my toddler decided to either pluck the bud off or pull it up from the bulbs. May have to rethink for next year, of course by then she will hopefully know not to do that. Harumph!
Posted by Karen at 2:32 PM No comments:

I'm back in the yard with my ever-optimistic view on the upcoming season. This year WILL be the best! Let's not have 2 month long heat waves and freak storms and whatever else this year.

Those tulips I planted last fall have sprouted. They haven't bloomed yet and have been stomped on by toddler feet a few times so some have died already and a lot were dug up by rampant squirrels, but the ones that remain look like they'll bloom in a week. yay! I take this as a sign of things to come. Mental note for next fall: plant more in bunches instead of sporadically through the yard.

The yarrow is thriving, so I am excited to see how it will turn out this year and the coneflower is coming back - yay! These were things I planted in the hottest part of the summer, so they were touch and go. Unfortunately the Montauk Daisy has met its sad death and will not be returning this year.

So what do we have on the list this year?
Our grapes are growing well, so we'll have to figure out the arbor soon. We have strawberries coming in, but I am so indifferent to them because they produce maybe one strawberry at a time. It's just a silly waste of space. The spearamint is coming in and we have one blueberry bush in the front and one in the back. Both seem to be doing well, but we are thinking of transplanting the one in back to the front and replacing a dead hedge border with a border of blueberry bushes (not sure how this will work though).

I am starting seeds this year for everything except tomato plants. We have been putting ourselves under more of a budget, so I am trying to use more seeds for food & flowers.

The problem with seeds is that I am now already behind. The flower seeds are going right in the ground and I'll just see what appears. The herb seeds are going in the seed starter kit.

How is it that the flowers are doing better mid-November than they were all spring and summer? I thought the geranium was dead until it started blooming again. I love how the leaves are turning red but the buds are just blooming. So strange.

Then this is my flower bed, the dusty millers are strong and healthy and the begonias are growing everyday!

The hostas are wilting but the sage and yarrow is also thriving and coming back to life. odd year.

- Posted using BlogPress from my iPhone

Is it too cold?

Hope it's not too cold for planting tulip bulbs because I haphazardly placed them around the front and back. Couldn't resist the smallest bag of assorted tulip bulbs at BJs. Only 50 instead of 125 but they are "premium" so hopefully that translates into hardy! We'll find out next spring.


- Posted using BlogPress from my iPhone

I skimmed a title of an article somewhere and the term "crop mob" stuck. I kept thinking "what the heck is a crop mob?" picturing a bunch of corn stalks all dancing in a public place. Well turns out, it's almost as cool (you can't really top crops dancing, sorry).

A crop mob is a group of people who "mob" local farms or green spaces and spruce them up for a few hours here and there. It is kind of like a flash mob, but for gardening. How cool is that?

Almost any information you want to find is on Crop Mob's website, including but not limited to a directory of some of the many crop mobs around the country. I found the local NYC one and joined up through facebook. I am amazed at how hard this small group of volunteers worked to beautify some really cool looking gardens around the city. They also spruced up some tree pits and other green spaces. They even got their hands on my favorite joint in Queens: Queens County Farm.

They've been getting some great publicity lately too. Here's a write-up from Time Out NY. They were recently highlighted on NPR as well. 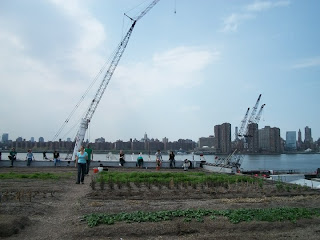 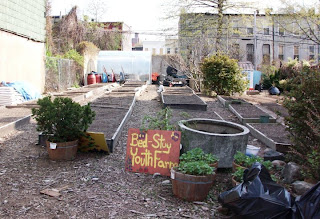 If you couldn't guess from my lack of personal gardening posts, I have all but given up on my own garden. Actually I don't know anyone in the area that hasn't given up. Everything has burned off, it's all a mess. I can't keep anything green and not from a lack of trying. Of course now it's raining and cooler, but unfortunately too little too late.

(insert saddest face you can imagine)
Posted by Karen at 6:54 PM No comments:

It seems silly not to compost yard waste and simple kitchen scraps, but I haven't the slightest clue where to start. I am trying to do this on a budget so don't want to spend the $100+ on a nice looking container, but at the same time don't want it to look ugly or cause a stink since the space is limited. I really would like a sturdy plastic container that is small enough to tuck away in the corner.

I saw this and am thinking of going for it even if it is $80. Seems like it might be the best solution.

Does anyone have any advice? Resources that might be handy? Experience composting in a small space?


I'm penciling in this workshop from the Queens Botanical Garden for September 19th to answer all my questions:

"Leaves, kitchen scraps, garden trimmings, and weeds can all become garden gold through composting. This class covers the essentials on composting, both outside in city yards and inside your apartment using a worm bin. See how making dark, rich, crumbly compost doesn’t take much time, work, or space. Teachers welcome--educational materials will be available. Registration is encouraged; to register, email: compost@queensbotanical.org or call 718-539-5296."
Posted by Karen at 1:52 PM No comments:

Karen
Woodhaven, NY
I moved to Queens in 2008 and was thrilled to start my first garden. My husband and I have experimented with several fruits, vegetable and flowers. I hope to continue to experiment and document it all. Maybe this thumb will turn greener as the days go on.